At IAAPA Expo 2019 Intercard will debut the much-anticipated iReader Impulse, a versatile hybrid card reader that is the first of its kind in the amusement industry. The iReader Impulse accepts credit cards (Visa, Mastercard, Discover) as well as stored-value play cards. This allows operators to leverage the burgeoning consumer use of credit cards for small transactions like game play. 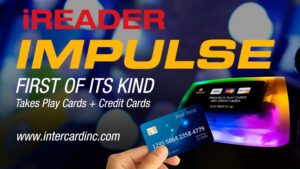 In testing at arcades the iReader Impulse has increased overall game revenue by as much as 20%. It is the first reader to help proprietors increase revenues by capturing the business of “impulse” players who just want to play a few quick games. Impulse players have traditionally used cash but that’s becoming rarer as FECs increasingly move from coin-op to cashless technology. The iReader Impulse gives these customers the same ease-of-use with no apps to download beforehand and no need to set up a mobile wallet on their devices.

Arcade and FEC customers have been asking for this type of reader for years but many manufacturers demurred because of the financial industry’s stringent security standards for credit cards and the complexity of the required software. Now Intercard has made it possible by employing a dedicated team of more than six software engineers who worked on the project for a year.

“We think the ability to use credit cards right at the reader will revolutionize our industry, allowing proprietors to capture a larger share of impulse play,” says Scott Sherrod, CEO of Intercard. “The iReader Impulse is a huge leap forward in game payment because it gives impulse players a quick and easy way to pay while giving proprietors all the benefits of cashless technology.”