Intercard Evolves Alongside the Market with New Focus on Global Marketing

It’s understandable that Intercard’s CEO Scott Sherrod often considers the question of exactly what business his company is in now. Anyone working in the tech world sees firsthand the rapid pace of change that is that industry’s lifeblood; it is a constant stream of new software and hardware evolving to meet the dynamic and constantly developing needs of the marketplace. 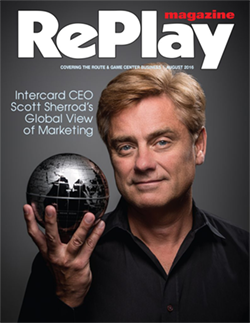 Debit payment technology is no exception to that endless transformation. That question keeps Intercard thriving in a globalized and digitized market that has completely changed since Sherrod’s father Ray founded the firm back in 1979.

“I think we’re primarily a global marketing company now,” said Scott Sherrod, who leads the St. Louis-based provider of payment solutions that has customers in six continents, six sales offices around the world, and customer service centers in North America and Asia.

Scott’s father was an electrical engineer who graduated from Washington University in St. Louis. After creating a debit card system for photocopying transactions in universities and colleges throughout the U.S., Ray began doing business with a growing number of retail photocopy stores. He then caught the attention of some savvy game center operators who saw the Intercard readers in action and asked if he could develop a system to eliminate cash payment for their arcade games.

“This is where Intercard’s roots as a marketing company began,” said Scott.  “We empowered a business (dominated by family game centers and bowling centers) where marketing and promotions are paramount with the tools to promote, track and manage their business better, while eliminating the costs, labor and downtime associated with tickets and tokens. In today’s language, our technology would be called ‘disruptive,’” Scott advised.

SEGA GameWorks was an early user, putting Intercard’s early system into multiple locations. The first international customer was a chain of venues in Mexico, and soon after that, the company went global. Today, there are more than 3,500 sites in more than 70 countries using the Intercard system.

According to the company, understanding the nuanced differences in the many countries and regions where they operate them has helped them continue to grow. Knowing that a customer in the Middle East will go to a center a few times a week compared to a few times a year for players in U.S. markets helps Intercard develop different strategies and tactics that they pass on to their clients in detail.

Scott can point to a number of recent technology advancements that started in one part of the world and migrated with Intercard to other regions.

Read the rest of the story >

This article was published August 1, 2016 by by Dan McGrath at replaymag.com