Intercard, a leader in cash management solutions for the amusement and casino industries, now offers teller machines and machine upgrades that comply with the EMV standard. 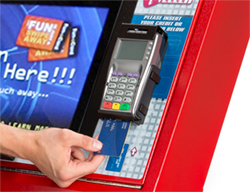 Since being put into effect in October 2015, the EMV standard leaves businesses currently using credit card devices that are not EMV compliant exposed to potential fraud. Intercard is the first debit card technology provider in the FEC and bowling centre categories to have EMV-compliant units live in operation. EMV is a technical standard for chip credit and debit cards (also called smart cards or IC cards) and for payment terminals and automated teller machines that can accept them. EMV cards and systems store their data on integrated circuits rather than magnetic stripes, although many EMV cards also have stripes for backward compatibility.

Payment cards that comply with the EMV standard are often called chip-and-PIN or chip-and-signature cards, depending on the exact authentication methods required to use them. EMV is an anacronym of Europay, MasterCard and Visa, the three companies that originally created the standard.

The two major benefits to smart-card-based credit card payment systems are improved security/fraud reduction and the possibility for finer control of “offline” credit-card transaction approvals. The US is the only country not widely using EMV technologies; the rest of the world has been using EMV for years. When the 2015 EMV compliance rule went into effect, responsibility for fraudulent card use shifted to the merchants when the merchant doesn’t use an EMV solution with chip cards. In a worst-case scenario, a customer makes several charges using a chip card on a swipe-enabled but not EMV-compliant device and then disputes the charges, leaving the merchant to foot the bill or take the customer to court. “We’ve already heard of such scenarios,” says Scott Sherrod, CEO of Intercard. “In some cases the merchant is forced to write off hundreds of dollars. It is important for every merchant to get this upgrade.”

This article was published May 3, 2016 at intergameonline.com